The likeliest tale, according to the paper referred to a shortstop for Indianapolis named John Wesley “Jack” Glasscock.     Jack had strained a tendon in his thigh during a game and afterwards went home to his farm. His father looked after a lame old horse called a “Charley horse.” When the senior Glasscock saw his son limping along, he reportedly exclaimed, “Why, John, my boy, what is the matter; you go just like the old Charley horse?” John supposedly shared the phrase with his teammates, and from there it spread. No matter the true origin of the word, a charley horse, or muscle spasm, hurts like a son of a gun and can be increasingly more common as we age. According to UCSF neurologist Bruce Miller, older people are at greater risk for cramps simply because of their age. Nerves control muscles, and nerves wear out. As Miller explains, “Muscles get weak and small, and nerves undergo some decay, with the tissue becoming thin. And when that happens, the connections that the nerves make to the muscle become less secure.” At 68, Miller keeps cramps at bay by eating a banana a day and drinking lots of water. The banana provides electrolytes with its magnesium, potassium, and calcium. Fluid and electrolytes, says Miller, while not proved to decrease muscle cramps, do seem to help by keeping nerve pathways healthy.

The medical definition of a cramp is the contraction of a muscle or muscle group that is unintentional. If the contraction is sustained for more than several seconds it moves from being a muscle in spasm to a muscle cramp. Many times, cramping occurs at night when we are resting or relaxing.

Nocturnal leg cramps, usually involving the calf muscles or the small muscles of the foot, are common and troublesome in older people. Besides the sudden, sharp pain, you might also feel or see a hard lump of muscle tissue beneath your skin. The spasm may last only a few seconds or could

torture you for several minutes. Today we are here to learn more about the cause of cramps and how we can minimize the probability of having one.

It is estimated that sixty percent of adults have cramps from time to time. The frequency increases as we age. Women suffer more than men with nighttime cramps. In addition to age, there are several risk factors that are often associated with muscle cramping. These include medications, dehydration, electrolyte imbalance, certain diseases, and exercise. You might be at higher risk of muscle cramps if you have diabetes, nerve, liver, or thyroid disorders. Certain medications can increase your risk of getting muscle cramps. Many of these medications are common among older individuals, such as treatments for cholesterol, osteoporosis, high blood pressure, Alzheimer’s disease, and Parkinson’s disease. Diuretics, which remove water from the body, can cause dehydration and lead to cramping. If you start a new medication and notice more muscle cramps it may be worthwhile to talk to your doctor or pharmacist.

Below is a list of common conditions and medications that are known to produce cramps.

Now that Stonebridge can offer outdoor fitness classes, remember it is important to have frequent drink breaks.   Muscle cramps are a common consequence of unaccustomed vigorous exercise. The intense use of muscles combined with dehydration and perspiration can create the perfect storm for muscle cramps. The loss of electrolytes like sodium, potassium, and calcium with perspiration will lead to cramping of muscles as well.

Dehydration for any reason predisposes one to cramping. Fluids help your muscles contract and relax and keep muscle cells hydrated and less irritable. An important preventive measure is to hydrate before, during, and after the exercise.

Other strategies to prevent leg cramps include: avoid smoking, stay well hydrated, avoid alcohol or caffeine before bedtime, and eat a balanced diet that has the recommended dietary requirements for vitamins and minerals. Foods rich in calcium, potassium and magnesium are essential. Gently

stretch muscles that seem predisposed to cramps before going to bed. Avoid assuming positions of the body that seem to cause cramping at night or during the day such as sleeping with the toes pointed which will in turn shorten calf muscles. If you are a stomach sleeper you may want to hang your toes over the end of the bed. Other studies advocate placing a pillow under the shins when we sleep or keeping the bed sheets un-tucked. Light exercise, such as riding a stationary bicycle for a few minutes before bedtime, also may help prevent cramps while you’re sleeping. Try different strategies and find out what works for you.

What do we do if we get a cramp? “Walk if off” if possible. One strategy that has been shown helpful is the use of reciprocal inhibition. This means we contract the opposing group of muscles which in turn forces relaxation in the antagonistic group. For a calf cramp pulling the toes back towards the nose with lots of energy (dorsiflexion of the foot) with the knee extended can sometimes relieve calf cramps. Next massage the muscle areas attempting to relax the muscle. Take a warm shower or bath or apply either heat or cold to the affected muscle.

Although most muscle cramps are harmless, some may be related to an underlying medical condition, such as:

In a pickle with those nasty leg cramps? WebMD says it may be worth trying pickle juice as a fast way to stop a muscle cramp. Many believe it’s effective because of the high water and sodium content. But that might not be the case. While pickle juice may help relieve muscle cramps quickly, it

isn’t because you’re dehydrated or low on sodium. It is more likely because

the pickle juice sets off a reaction in your nervous system that stops the cramp, according to recent research. If small amounts are taken there should be little to no health or dehydration concerns. Pickles, especially homemade, have high levels of probiotics for gut health and immune system function as well.

Sports dietitian and strength coach Dave Ellis, RD, CSCS has been working extensively on cramp prevention strategies during his 26 years of work with American Football players. He believes muscle fatigue is at the core of cramping. He talks about dehydrated-hyponatriamic muscle (low sodium) speeding up the rate that a muscle exhibits fatigue properties that lead to spasticity. After years of coaching at an Olympic level he can assure you there is more to preventing and resolving painful cramping than ingesting sports drinks. Instead, he suggests bicarbonate. He said, “So we started keeping one-liter bottles of non-aspirin Alka Seltzer (acid indigestion formula) on the sidelines during early-season games. We started to ensure the athlete was ingesting the buffered solution while they were doing some stretching and muscle cooling activities. That helped resolve muscle pH (free radical) inflammation issues–precursors to fatigue and slowed muscle relaxation.”

Tonic water originally existed as a way to deliver quinine; an anti-malarial drug derived from the bark of the South American cinchona tree. Tonic water, and the quinine it contains, has been suggested as a prevention for leg cramps for decades. Most studies indicate that there is not enough quinine in Tonic water to be helpful, but you will find that some people swear by it.

No matter what strategy you try, adding stretching exercises at least three times a day has been proven to be helpful in preventing spasms. I’ve highlighted the calf stretch today as that seems to be one of the most common areas affected by cramps.

Calf Stretch: There are many ways to execute a calf stretch. Below are two of my favorites. In Figure one all you need is a yoga block, a big book or a step. Be certain you are holding on and the ball of the foot is secure as you drop the heel. Stretching should be to the point of stimulation but it should never hurt. Remember to breath as you count out loud to 30.

In figure two start with the leg you want to stretch behind. Place your toe against the wall. Next plant your opposite heel to the ground as you bend

your front knee towards the wall. As your flexibility improves move your back foot further away from the wall.       The goal is to hold the knee to the wall as you count out loud.     I’m hoping that a charley horse will never cramp your style again. 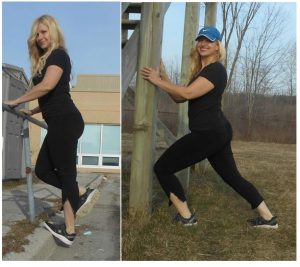 We’d like to thank and recognize our partners and funders in the community.

Stonebridge Community Services is a not for profit organization providing in-home health care and preventative health services designed to help people maintain good health and independence through the aging process. Stonebridge services are available to everyone in the community and are designed to enhance or support a wide range of health services.